Forming an organisation dedicated to the promotion of an idea, a cause or an interest, is one of the hallmarks of modern society. In one sense, these modern social bodies have, in our most recent history, shaped the way we perceive and understand how we order the world by creating a concept of human, educational, cultural and intellectual capital in lieu of one based almost entirely upon the control of land. Ranging from learned bodies such as the Royal Society of London (1660) to ‘professional’ bodies such as the Institute of Chartered Accountants in England and Wales (1880) and, closer to home, the Designers’ Institute of New Zealand (1991) they are, in effect, one of the more tenuous manifestations of service capitalism.

In a 2012 lecture to the Friends of the Hocken Collections – another sort of social body – the photographer Gary Blackman referred to the Dunedin-based Visual Arts Association, an organisation established in 1951 ‘to encourage the appreciation of good design’, that he had chaired for a time (G Blackman, Aspiring to art; the William Mathew Hodgkins memorial lecture (Dunedin: Friends of the Hocken Collections, 2014), p. 26). The association's formation is telling evidence of the collective way many New Zealanders came to appreciate and understand design, a process that had been either marginalised or ignored in New Zealand's short history of Pākehā culture. Like much else in post-war New Zealand, the design debate was predominantly a British cultural import and it arrived in New Zealand through a variety of media including journals, books, lectures, newsreels and, not least, designed commodities.

The Visual Arts Association was not the the first locally organised body established in the face of national indifference to design matters. The earliest – and the sole survivor of the phenomenon – was the Wellington-domiciled Architectural Centre. Formed in 1946 with the utilitarian purpose of providing a support framework for Wellington-based students of the Auckland School of Architecture, the centre, almost incidentally, expanded its remit to promote and encourage a debate about how larger issues of design could be encouraged to flourish in a local context. Between 1948 and 1952 it sponsored the publication of Design Review, the first journal in the country to explore the concept of design in a critical fashion. With its focus on regional modernism and embrace of theory, the centre espoused a progressive ideology; a number of its key figures – Ernst Plischke springs to mind – were refugees from Nazism and they understood that design was political.
In Auckland, such concerns were regarded with a degree of distrust. In 1949, in the wake of a visit by the British industrial designer Milner Gray, a group of interested individuals with an interest in design issues associated with Cyril Knight (1891-1972), professor of architecture at the Auckland University College School of Architecture, formed the Auckland Design Guild, ‘an association providing for the exchange of ideas on the arts and sciences connected with design’ (‘Pledge to combat shoddiness’, New Zealand Free Lance (27 July 1949), p. 9). Knight, an Australian who had been appointed to the school in 1924, had conservative rather than modernist inclinations, a tendency reflected in the archaic designation of the body as a ‘guild’. The guild’s existence was fleeting; it failed to survive the year. One former, architectural, member later recalled it as ‘too theoretical’, explaining that ‘considerable time was devoted to ruling out any commercial exhibition of members’ work’ (P Parsons, ‘The postwar development of industrial design in New Zealand’, New Zealand Manufacturer, 18:1 (October 1965), p. 68). In fact, a surfeit of theory was probably the least cause of the guild's failure. It was more probable that, like many of his academic contemporaries in Britain, that Knight - no theoretician – objected to the guild being used to provide commercial enterprise with a veneer of objective respectability; it was too difficult to reconcile arts and crafts romanticism with the pragmatics of growing a business.
The Visual Arts Association was formed as a consequence of two meetings convened by the Adult Education Department of the University of Otago and its first chair was Dr Edward Murphy, lecturer in design at the School of Home Science. Its first pamphlet declared aspirationally that ‘the terms of reference of the Visual Arts Association are very similar to those of the Council of Industrial Design (CoID) of Great Britain, even though the association is a voluntary body’. However, where the CoID was charged by Parliament ‘to promote by all practical means the improvement of design in the products of British industry’, the Dunedin association was restricted to embellishing the Lecture Hall of the Dunedin Public Library with, as Newman recalls, ‘a room setting furnished with a range of [imported] objects selected from local shops’.  The furniture, though, was New Zealand made although, looking at the photographic evidence, much of it it was based on designs pirated from Australian and United Kingdom prototypes (T Esplin, ‘Visual Arts Society’, The Press (15 May 1962), Supplement on design in industry, p. 4). As Blackman relates, the association's ambitions were not matched by the reality of it being a small, university-based, organisation and it 'soon broadened its concerns to include current visual arts and crafts and undertook a wide-ranging programme of lectures, panel discussions exhibitions and films. The association was wound up in 1968.
Probably the most ambitious of the mid-twentieth century New Zealand design promotion bodies was the Christchurch-based Design Association of New Zealand (DANZ). In July 1957 Roger Lascelles (1928-), a self-described Christchurch ‘foreign and intercolonial buying agent’ – recently returned from Britain and impressed by the CoID's recently opened London 'shop front', the Design Centre – had a letter published in Design, the house magazine of the CoID: 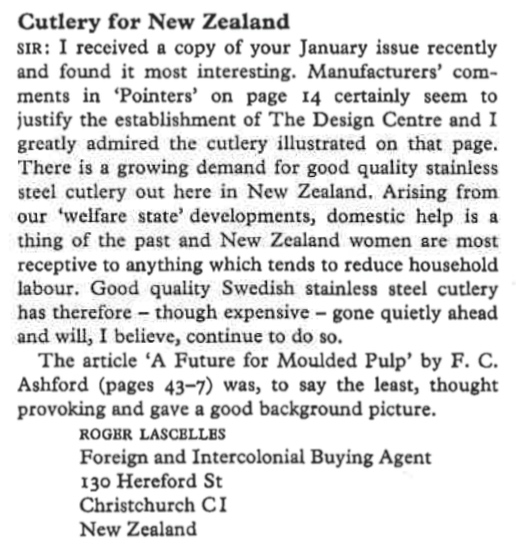 By December 1959, Lascelles – who was well-connected in Christchurch social circles – had begun organising for the creation of a similar facility in New Zealand, albeit on a smaller ­scale. Alerted to these moves and responding to enquiries received from the CoID concerning Lascelles’ status, the Department of Industries and Commerce (DoIC) interviewed him, reporting that:

Mr Lascelles is very keen about the subject of industrial design and appears to be well informed. He is full of enthusiasm and could, I think, do some useful work in making the subject more generally known in New Zealand, provided his group consists of responsible and more mature people who could guide him; perhaps they might even have to restrain him (Archives New Zealand IC W1926 57/1/6 vol 1 box 1797, Memorandum from H Larsen to W Sutch, 25 January 1960).

In fact both the NZSID and elements of the DANZ appear to have been confused as to the function of a design promotion body - such as the CoID or the IDCA, both of which had been developed within the appropriate ministries of trade: they were not formed to impose state regulation on design or designers or to determine an approved standard or type of design. In a briefing note to the minister, Sutch opined:


The successful operation of a design council would lead to a developing understanding of good design, but basically the objectives of establishing a design council are to ensure ways by which the best design practices may be encouraged in industry, and educational facilities improved as necessary, to provide industry with adequate numbers of suitably trained designers. In other words, the main justification for the work of a design council is economic, leading to a better use of the country's resources, a decreasing pressure for imported manufactured goods, and greater opportunities for export trade in such products

As Sutch observed to the minister, design councils were not just about aesthetics. (Archives New Zealand IC W1926 57/1/6 vol 3, Memorandum from W Sutch to Minister of Industries and Commerce, 20 September 1963). As it was, Saunder's letter was the last shot in Beadle's war. In March 1964 Sutch briefed the parliamentary undersecretary for trade and industry noting that the DoIC had been in contact with 'Professor Beadle of Auckland who on various occasions expressed publicly his strong disagreement  with the [proposed council]. He has since privately told the department that he will not obstruct the establishment of the Institute (sic). Both Beadle and Saunders resigned from the executive of the NZSID, being replaced by Keith Mosheim and D J Haynes respectively, both practitioners working in the private sector. Mosheim wrote to the minister requesting that it should be represented on the proposed council but when the council was, finally, brought into being in 1968 no members of either the NZSID or the DANZ were appointed. The NZSID survived as a practitioner body until 1988 when its members voted on a change of constitution and name. In 1991 the re-jigged organisation merged with the New Zealand Association of Interior Designers, emerging as the Designers Institute of New Zealand.

New Zealand first became a part of the world economic system at some point near the end of the eighteenth century. Like most colonial constructs, it exported products that would be transformed elsewhere, usually in Britain and, employing Keith Sinclair's memorable expression, 'imported its standards of living'. Peter Gibbons, noting the endurance of this long-standing colonial relationship, has elaborated that 'Even when local production of goods has been promoted and encouraged, at times subsidized, such goods, based upon designs and technologies developed elsewhere in the world system, are seen as substitutes for the 'real thing'. [...] People want goods from elsewhere, preferably with designer labels, not what is homegrown' (P Gibbons, 'The far side of the search for identity: reconsidering New Zealand history', New Zealand Journal of History, 37:1 (2003), 38-47, p. 42). The post war design societies were a collective response in an attempt to deal with what can, in retrospect, be identified as a cultural concept imported from Britain. The way that the societies processed this newly translated notion of design varied: by adapting it to the local condition, as the Architectural Centre was to do; by ignoring it, as the short-lived Auckland Design Guild did; by using it to define a newly 'professionalised' occupation as the NZSID sought to do; or as the DANZ aspired to do, by using it in an attempt to reinforce a colonial status quo.

Posted by Christopher Thompson at 13:49 No comments: