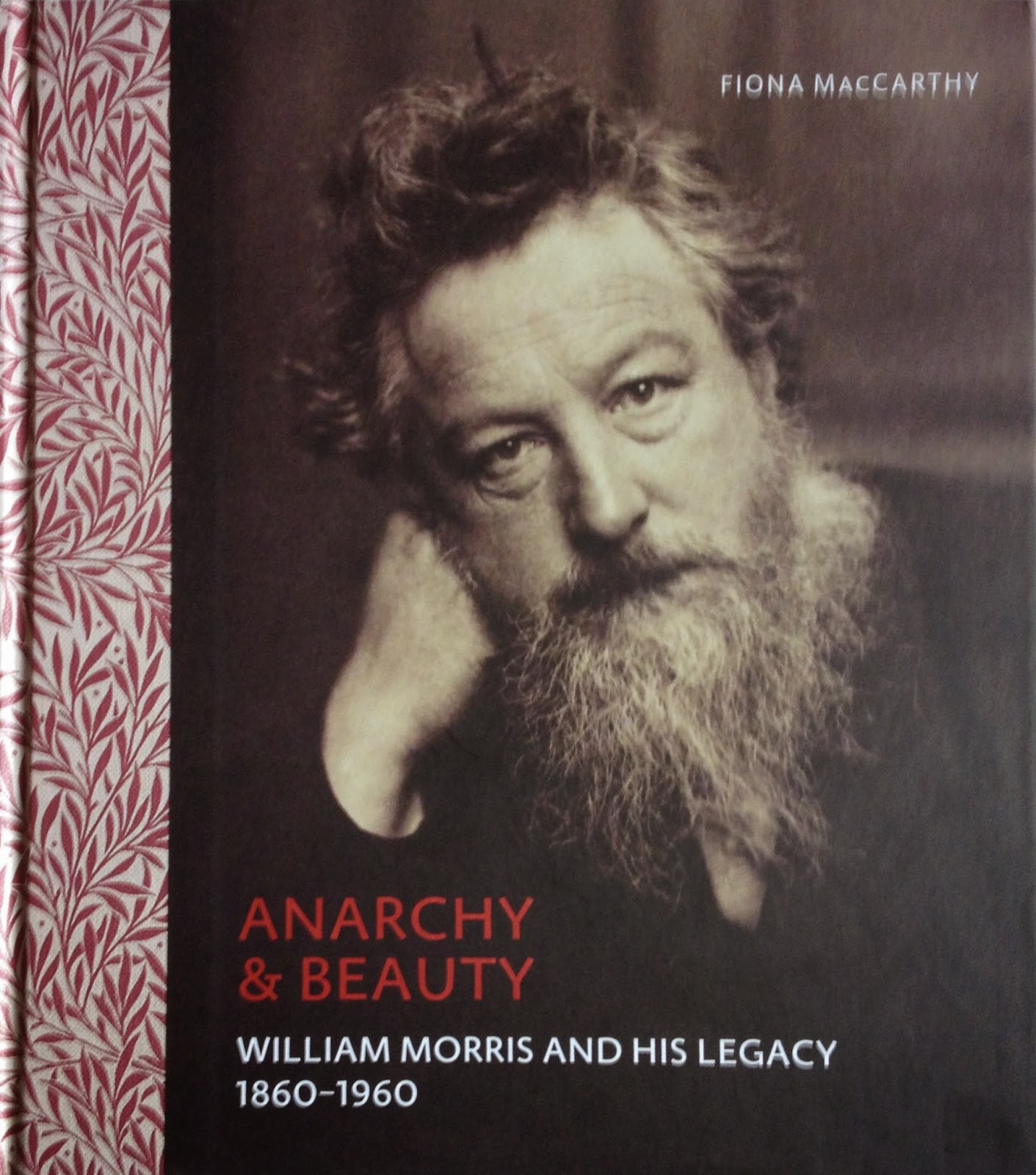 On the face of things, William Morris (1834-1896) doesn’t seem to have much of a profile in New Zealand. As a promoter of the arts and crafts movement, which, together with John Ruskin, he founded, he’s a reference, a distant source of an idea. His work as a poet, printer and a political activist, is pretty much ignored probably for the same vicarious reasons. His productions of textiles and furniture, as retailed through Morris, Marshall, Faulkner & Co (later Morris & Co), were with the odd exception (the book collector Alexander Turnbull being the notably odd exception) too expensive for the thrifty burghers of the colony and, with its socialist resonances, too devoid of imperial glory for the grandees of the dominion. While his romantic mediaeval-revival poetry and sagas found some passing New Zealand adherents in the early years of the twentieth century, they were known through cheap posthumous editions, not through the beautifully crafted editions from his Kelmscott Press; only Turnbull was financially enabled to collect those. Strangely enough, it was Morris' theorising about art that had impact in the colony, largely by its promulgation through an inadvertent process of colonialism: art education.
A man who has prompted multiple biographies, Morris and his productions appear in most major collections of art and design although there aren't many of those in New Zealand. The tokenist holdings of Morris-related material in the Auckland Museum include a printed curtain, posthumously produced by Morris & Co and a 'Rossetti' chair, marketed by Morris & Co (both acquired in the 1980s). Te Papa's holdings include a stained glass window produced by Morris & Co and a sketch design by Dante Gabriel Rossetti for another Morris & Co window. Morris' designs have been the subject of numerous exhibitions around the world. In 2008 the Christchurch Art Gallery was the venue for Morris & Co: the world of William Morris assembled by the Art Gallery of South Australia, the one Antipodean institute with a significant holding of his work. The focus of these exhibitions has been on Morris’s work as a designer of textiles, furniture and private-press books and on his firm's retailing of carefully co-ordinated, expensively-produced, commodities for the well-upholstered interiors of the privileged classes.

The National Portrait Gallery in London is the – perhaps surprising – venue for the exhibition Anarchy and beauty; William Morris and his legacy, 1860-1960, curated by the independent historian Fiona MacCarthy, author of one of the more definitive recent biographies of Morris, William Morris: a life for our time (London : Faber, 1995).  Unlike its predecessor exhibitions Anarchy and beauty investigates the political dimension of Morris' design activities and the impact they had not only on his contemporaries but also on the subsequent generations of theorists, agitators, designers, planners, makers and retailers. Even with its British focus, the exhibition promotes an impressive genealogy, even if some of the more connective elements of the table are missing.

Where, for example, is that great implementer of Morris' ideology, Hubert Llewellyn Smith? Smith underwent a Damascene conversion to Morris' vision after attending a lecture 'Art and democracy' given by Morris, under the aegis of Ruskin, in the hall of University College, Oxford, in November 1883. He was so inspired that he became a Toynbee Hall pedagogue, a protégé of the Webbs, the effective founder of the Central School of Arts and Crafts (by way of his 1893 report on technical education for the London County Council), the founding secretary of the Labour Department of the Board of Trade and the patron of William Beveridge, the originator – in 1908 – of the Exhibitions Branch of the Board of Trade and hence a whole line of state-sponsored design promotional organisations up to today's neutered Design Council.
So in this glorious rag bag of those influenced by Morris' ideology we get the designer Walter Crane (represented in the exhibition among other things by his design of the membership card of the Hammersmith Socialist Society) and the socialist poet, philosopher, anthologist and early LGBT activist Edward Carpenter (represented by his Indian-made sandals) ; the anarchist geographer and philosopher Prince Pyotr Kropotkin; the Suffragette painter Sylvia Pankhurst and the stained glass artist Mary Lowndes; the painter and potter William de Morgan and the silver designer, architect and pedagogue C R Ashbee (a magnificent silver peacock brooch he designed for his long-suffering wife); the priapic calligrapher and designer Eric Gill and Ebenezer Howard, the architect and planner who developed the idea of the garden city. Leaping well into the twentieth century we encounter the furniture and textile designers Robin and Lucien Day, the industrial designer Misha Black and, lastly and certainly not in his view leastly, the retailer Terence Conran. But, as the Guardian's Rachel Cooke observes, despite all this plenitude of names and associated objects, it's fundamentally all about 'Morris, the fat spider, who sits at the heart of the web constructed by the exhibition's curator, Fiona MacCarthy'. It's Morris' insistence on the availability to all of objects that are both utilitarian and beautiful and that the acquisition of manual skills is not only essential to a well-rounded life but also a life-enhancing political act. In Morris case, beauty was to be found in the relics of Mediaeval Europe, later adherents to his thinking found it elsewhere.
It's in Ann Calhoun's impressively researched book The arts and crafts movement in New Zealand 1870-1940: women make their mark (Auckland: Auckland University Press, 2000) that we are able to understand both the impact that Morris had in New Zealand and, in part, why this legacy has been so ignored by local historians of art and design.

Design and its relation with manufacturing was an issue that had been a concern of the British state long before Morris began delving into its roots. From the late 1830s, the British government began establishing Schools of Design around the country aimed primarily at improving the quality of design and thus of industrial production. By the 1850s responsibility for overseeing the curricula for these schools was controlled via the Department of Science and Art's South Kensington Museum. As Calhoun notes, Morris became an adviser to the South Kensington Museum in 1876 and was appointed an examiner, a position he retained until his death. In the absence of any local initiative, this British art training system was imported directly into New Zealand through the establishment of local art schools – with minimal government involvement – who employed not only graduates of the South Kensington National Art Training School but also its teaching methodologies and examinations. Given the non-existence of any significant manufacturing industry in the colony and thus an associated class of 'skilled artisans' the majority of those attending these schools tended to be women and the focus of their education tended to be domestic and/or appropriate for the teaching of primary school children; drawing was an required to be taught in New Zealand schools under the terms of the 1877 Education Act.
Arts and crafts productions did however receive considerable popular exposure and even some acclaim in 1906-07, at the New Zealand International Exhibition held in Christchurch, but these were British made, selected by Walter Crane in his capacity as president of the Arts and Crafts Exhibition Society. Crane's role didn't require him to visit visit New Zealand – he was represented at the exhibition by Alfred Appleby Longden – but he also designed the frieze used on the walls of the exhibit, although he'd executed it for the 1904 Louisiana Purchase Exposition, held in St Louis in the United States. The inclusion of these arts and crafts pieces in the exhibition seems to have been the result of significant lobbying by Hubert Llewellyn Smith in his then capacity as acting permanent secretary of the British Board of Trade. They were an highly popular component of the exhibition: many pieces sold, 321 articles by 72 exhibitors. However, as Calhoun observes, the exhibit was 'very English' and a colonial hankering for reasonably-priced relics from 'home' may have accounted for the popularity of the pieces, few of which have been identified subsequently.

Effectively, by being stripped of its political dimension, gendered as a feminine concern and its promulgation confined to the genteel middle classes, Morris' noisy, rumbustious, socialist, all people and all classes, hands-on arts and crafts movement failed to flourish in colonial New Zealand. As Calhoun's text demonstrates, there were some enormously talented designers and makers, but the marginality of art and the absence of any viable market for their productions effectively put an end to any dream of living by their work.
As Anarchy and beauty clearly demonstrates such was not to be Morris' British legacy. His socialism may have been overtaken by larger political events, but its core values remain a part of British political discourse. His furniture, textile and wallpaper productions may have been dismissed for much of the twentieth century as old-fashioned (Morris & Co finally closed in 1940) but the objects he designed and made, as indeed are those of his followers and adherents are highly sought after and many of the textiles and wallpapers remain in production. MacCarthy's intelligently structured, slyly witty (not the usual experience one imparts from a serious exhibition), brilliantly contextualised and beautifully selected exhibition shows the vitality of Morris' thinking and, indeed, its relevance to today. Appropriately, it's also well-designed and is accompanied by an equally rewarding catalogue. A must see, if you can get there.
Posted by Christopher Thompson at 12:28 No comments: