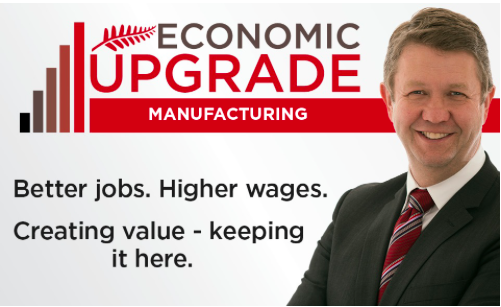 Over the past few months the New Zealand Labour party has been releasing a slew of policies, something that might be expected given that it's an election year. At first glance, these announcements appear somewhat fragmentary and devoid of holistic application but, in the absence of any clearly articulated policies from the current National party government - other than a general commitment to drilling, mining, irrigating, building motorways and selling state-owned assets for the benefit of a wealthy few - they’re a welcome indication of what the opposition would do should it succeed to the Treasury benches following the general election in September. This past month (17 April) saw the launch of Labour's manufacturing policy, which addresses the recent hollowing out of the country’s manufacturing sector, once its largest source of employment and a generator of research and skills. Underpinning these policy announcements have been a number of speeches by key members of the Labour caucus identifying the country’s growing inequality and suggesting ways this condition might be addressed.

Taken together, these policies suggest a significant change in ideological direction by the Labour party, hitherto - at least since 1984 - in thrall to the siren song of the free market. In some respects these recent announcements appear to mirror the radicalism of those that saw Labour elected for the first time in New Zealand in 1935, but they’re not. What they represent are well-informed, more nuanced, better-targeted responses to a sustained crisis of capitalism, in a country that, in population terms alone, is not only many times larger than it was eighty years ago but also increasingly complex in terms of the economic and social challenges it faces. Moreover, despite the current government’s increasingly colonial relationship with the People’s Republic of China, New Zealand no longer depends on a single market as an outlet for its primary products.

Labour's manufacturing policy is a considered response to the issues raised in the parliamentary opposition’s timely and comprehensive 2013 inquiry into manufacturing, Manufacturing: the new consensus. The parliamentary inquiry recommended three central proposals (out of a total of eleven) that suggested ways in which New Zealand’s manufacturing sector might be revitalised. The first recommendation that: ‘The government adopt macroeconomic settings that are supportive of manufacturing and exporting’ is hardly radical but entirely pragmatic given the desired outcome of greater industrial activity. The second recommendation ‘that New Zealand businesses are encouraged to innovate’ is consistent with progressive attitudes to manufacturing that reject the supposedly laissez-faire doctrine of neo-liberalism and articulate a role for the state in encouraging an economic accruals that benefit the entire country, not just a particular, investor elite. Recommendation 3, which argues that ‘The Government [should] adopt a national procurement policy that favours Kiwi-made and ensures that New Zealand manufacturers enjoy the same advantages as their international competitors’, is, again unexceptionable, at least when viewed from the perspective of the left.

It’s the second recommendation that warrants some unpacking because its promotion of innovative, research-based research carries the inquiry’s few and fleeting references to design. The first mention refers to an OECD report that identifies design as being one of the agglomerate benefits of manufacturing (p. 15). The second observes that in respect of research and development in manufacturing industry that many submitters to the inquiry had cited the ‘Better by Design’ model ‘to meet business needs in a timely, cost-effective and competent manner’. (p. 23). 'Better by Design' is a management-focussed programme operated by New Zealand Trade and Enterprise, an SOE working under the aegis of the Ministry of Business, Innovation and Employment. It emerged from the recommendations of a ‘Design Taskforce’, established in May 2002 by Jim Anderton, the Alliance party minister of Economic Development in the first Clark Labour-led administration.

Parliamentary inquiries into manufacturing by progressive political parties are hardly a new thing: the British Liberal party undertook a similar exercise in 1928, only beaten by the British Labour party which set up a parliamentary inquiry ‘into the conditions and prospects of British industry and commerce with special reference to the export trade’ during its brief term in office in 1924, although its final report wasn’t published until 1929 when Labour regained office. The aims of the 1924 British inquiry don’t seem too different from those of the 2013 New Zealand version, which aimed to ‘ascertain the problems confronting manufacturing and policies that political parties can adopt to best deal with those problems'. Indeed, both inquiries had the overriding aim of dealing with the problems and implications of free trade regimes.

An innovation of the 1924 inquiry was that it addressed the impact of research and development on manufacturing and trade at some length. More significantly, it also argued for a greater recognition of the role of design and designers in the manufacturing process and even alluded to the need not only of educating designers and consumers but also taking into account their needs and requirements through recognition of the ‘distributive trades’:
There is no doubt that the tendency of modern industrial and commercial organisations to widen the gap between the original producer and the ultimate consumer has thrown into the hands of intermediate buyers and salesmen, both wholesale and retail, an increasing power of influencing for good or ill, the standard and trend of current industrial art’ (Great Britain. Committee on Industry and Art, Factors in industrial and commercial efficiency (London: HMSO, p. 351).
It was a lesson that the New Zealand ‘Design Taskforce’ resolutely ignored throughout its recommendations that design was not only a producer-led process but also, in what it described as an increasingly global manufacturing environment, something that transcended international borders.  For the Taskforce, and for the ‘Better by Design’ programme, local manufacturing is something of no great importance other than an opportunity for designer engagement. In the neo-liberal doctrines espoused under the ‘Better by Design’ regime production is best undertaken where production costs are the most competitive.

Design, at least as we understand it today, is a product of industrialisation; modern capitalism. It developed from the need to plan and shape the form of industrially-produced commodities in order to meet the demands of a newly invented, democratised, class of consumers. It expanded its scope in order to sell those same productions, by mediating, shaping and educating the desires of consumers; and it matured as its role was accepted as part of the way we construct our material world. But according to many practitioners, the current primacy of a global market-driven economy hasn’t had a negative impact on either the quality or the availability of design production. The received idea many, mostly corporate, designers promote is that even though things might be physically produced elsewhere, they can always be designed by practitioners based anywhere in response to local market requirements; it all depends on the brief.

This glib reasoning, posits design as operating in a producer/distributor/designer bubble. A good exemplar of this way of thinking can be found in a recent addition to the Auckland bus fleet. In January 2011 New Zealand Bus Ltd, formerly Stagecoach New Zealand Ltd, a subsidiary of the British Stagecoach Group (sold November 2005), and operator of most of the Auckland isthmus bus network, announced that it was to invest in a new bus fleet. Its chosen supplier was the Scottish bus and coach manufacturer, Alexander Dennis Ltd.

It is perhaps no coincidence that the majority shareholders in both the Stagecoach Group and Alexander Dennis Ltd are the Scottish transport operators Sir Brian Souter and his sister Ann Gloag. New Zealand Bus has subsequently acquired three hundred and fifty ADL Enviro 200 midi buses at a cost of around NZD150 million. Designed in 2006 and looking very much the product of the automotive and transport design course at Coventry University, the bus has proven inappropriate for New Zealand conditions: among other things, critics have pointed out that it is too small to cope with current passenger numbers; the rear of the bus is too low for many passengers; and the doors, seats and aisles too narrow for the New Zealand commuter environment. At a rate of thirty per cent of the adult population, New Zealand does, after all, have the second highest levels of obesity in the Anglophone world.

Probably the most successful urban bus design of all time was the London Routemaster, a bus design developed between 1947 and 1956. Notwithstanding its universal popularity, the design of the Routemaster responded to a very London-centric brief: it was economical, lightweight, agile, highly practical, and equipped - by Douglas Scott (1913-1990) - with comforts, such as heating and moquette-upholstered seats, that were as good as, if not better, than those available in cars of the time. It’s no coincidence that the Routemaster was designed within the context of the post-war command economy and at a time when the state had effectively made design its own through bodies such as an enviably well-funded design promotion body, the Council of Industrial Design (1944), programmes such as the Utility rationing scheme (1941-1951) and design-driven mass-visitor exhibitions such as Britain Can Make It (1946) and The Festival of Britain (1951). The success of the Routemaster design, still in (limited) service some sixty years after its introduction, stands in marked contrast to the contrived gimmickry of the latest London bus design (Heatherwick Studio, 2013), an ungainly, expensive, late post-modern ‘tribute’ to the erstwhile prototype.

Auckland’s inappropriately accommodated, dysfunctional, midi bus and London’s self-indulgent parody bus both represent different aspects of the way neo-liberal entities in both the public and private sectors employ design as a mechanism for maximising profit while minimising the role of users and consumers. The design of these buses illustrates the problematic confronted by manufacturers, exporters, progressive politicians and administrators as they attempt to grapple with New Zealand’s growing manufacturing hiatus. Like many political announcements made by under-resourced opposition parties, Labour’s policy statement on manufacturing is big on vision but short on detail; nonetheless it's, at least, a step in the right direction. If design is to be a part of that vision of a reinvigorated manufacturing sector, it has to be a model of design that allows for a more nuanced understanding of the process than is found in the approach encapsulated by the 'Better by Design' programme: a corporate fantasy of producer-driven mediated gloss on commodities fabricated elsewhere.

Posted by Christopher Thompson at 15:31 2 comments: