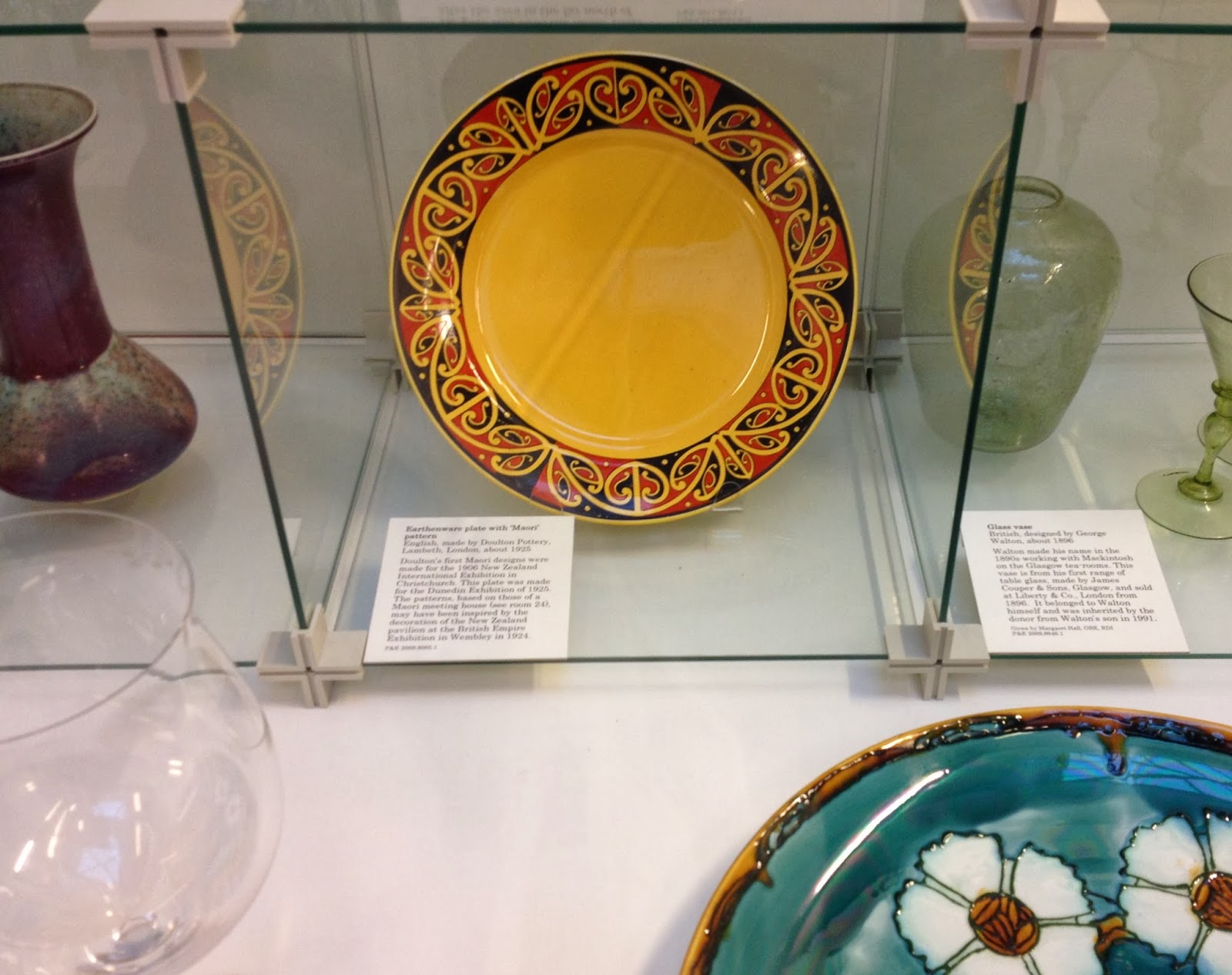 In 2009 the British Museum's Department of Prehistory and Europe purchased at the Alexandra Palace Antique and Collectors Fair in London an earthenware plate decorated with a coloured transfer-printed kōwhaiwhai (painted rafter decoration) border. This ‘Maori Art’ plate was fabricated at the Lambeth factory of the British ceramic manufacturer Doulton & Co in about 1925. It is currently on show at the museum in a display devoted to the emergence of modernism in Europe. Surrounded by the work of George Walton, Josef Olbrich, Henri van de Velde, Mikhael Adamovich and Marianne Brandt, the plate’s abstract design seems to have been deployed by the museum to exemplify the art historical trope that links the ‘primitive’ to the modern. The positioning of this apparently anonymously designed plate amongst these modernist archetypes seems to resonate with Evan Kindley's recent observation in the London Review of Books, that there's a fear amongst historians that they 'will slip into the comfortable grooves of "great man" narratives - a tendency to which scholars of modernism, always a congress of cults of personality, are particularly prone.'

Accompanying the plate is a label that, even accounting for the constraints imposed by its function and format, is not only notable for the absence of accurate information concerning the plate’s design, production and consumption but also for the revisionist perpective it provides on contemporary British views of the relationship that existed between between the colonising power and its colonial subjects.  The label reads as follows:

Earthenware plate with ‘Maori’ pattern
English, made by Doulton Pottery, Lambeth, London,
about 1925

Doulton’s first Maori designs were made for the 1906 New Zealand International Exhibition in Christchurch. This plate was made for the Dunedin Exhibition of 1925. The patterns based on those of a Maori meeting house (see room 24) may have been inspired by the decoration of the New Zealand pavilion at the British Empire Exhibition in Wembley in 1924.

The British Museum’s plate isn’t the first example of Doulton’s ‘Maori Art’ ware to enter a British collection: the Fitzwilliam Museum in Cambridge has a bone china cup and saucer exhibiting the same pattern, fabricated at Doulton & Co’s Burslem factory about 1930, which it acquired by donation in 1993. While the Fitzwilliam’s on-line catalogue description again fails to describe the pattern accurately or to acknowledge its source, it does suggest that the pattern pre-dates the ‘decoration of the New Zealand pavilion at the British Empire Exhibition in Wembley’ by at least twenty odd years.
As has been previously observed on this blog, the design of the ‘Maori Art’ pattern was based on an illustration that reproduced twenty-nine kōwhaiwhai collected by the Anglican bishop Herbert Williams to accompany his chapter ‘Description of Maori rafter patterns’ published in Augustus Hamilton’s Māori Art (Dunedin: Ferguson and Mitchell for the New Zealand Institute, 1897).
The Doulton pattern design most closely matches Williams' rafter pattern no. 25, Mangōpare (hammerhead shark), which he identified as coming from the wharenui named Tamatekapua (constructed in 1878) of the Ngāti Whakaue subtribes Ngāti Tae-o-Tū and Ngāti Tūnohopū, of the Te Arawa descent, at the Te Papaiouru Marae near Ōhinemutu.
It is unclear how the Mangōpare design came to the attention of the art department at Doulton & Co’s Burslem factory, who were most probably responsible for producing the transfer plate used for the production of the first wares – in bone china – that carried the pattern. However, confusingly, the British Museum on-line catalogue description, presumably on the basis of information recorded in the 1909 registration of the design (537842), identifies the pattern as being the result of a collaboration between the Doulton Lambeth factory artist Francis Pope and its art director Joseph Mott.

Speculatively, Doulton's 'Maori Art' line may have resulted from an order placed by John Shorter, their Australasian agent. Resident in Australia since 1878, the Staffordshire-born Shorter, during the 1890s, became involved in the efforts of Richard T Baker, a graduate of the South Kensington Museum design training scheme and curator of the Technological Museum in Sydney, to promote the use of specifically Australian iconography in manufactured commodities destined for the Australian market. The idiom identified by Baker as being uniquely ‘Australian’ was its flora; Shorter’s embrace of the 'Australian flora in art' cause focused on the upper end of the market and included boldly painted porcelain and earthenware vases and plates.

Doulton was not unique in its efforts to employ Australian iconography on products specifically identified for the local market. Other British manufacturers, such as Josiah Wedgwood & Sons, also produced Australian lines, although not so exclusively and not so visually effective. Wedgwood, for example, produced from around 1882 a cream-coloured earthenware ‘Australian flora’ range decorated with painted transfer prints probably derived from botanical monographs. The qualitative difference between the productions of the two British companies seems to lie in the work of an exiled French Communard painter Lucien Henry, resident in Sydney from the late 1880s until his death in 1896. Whether he realised his role or not, the Beaux Arts trained Henry effectively reconfigured visual perspectives of colonial markets; from the documentary to the aesthetic.

From the 1840s until the early 1980s, British ceramic manufacturers dominated the New Zealand tableware market. Their goods entered the country under preferential trade tariffs that subjected non-British competitors to a range of swingeing taxes and duties. They also had an unrivalled network of local agents, but, most significantly, it was their close relationship with the London-based distribution firms who, until the advent of readily available illustrated media, controlled the British export market and, effectively, determined what New Zealand consumers knew about and purchased.

This cartel-like network was reinforced during the three major exhibitions held in the country between 1865 and 1925 which included representative displays from a number of  major British ceramic manufacturers, under either their own name or that of selected retailers. At the 1865 New Zealand Exhibition held in Dunedin, Doulton & Watts, the predecessor of Doulton & Co, exhibited under its own name while Josiah Wedgwood & Sons was represented by the Bond Street ceramic retailers William P and George Phillips; Pinder Bourne, the predecessor company of what became Doulton & Co’s Burslem plant, were shown by a local agent, M Calvert of Dunedin.
The 1906-07 New Zealand International Exhibition held in Christchurch again saw British firms dominating the commercial displays of ceramics either in their own right or under the aegis of local agents. Doulton exhibited both in the British government's fine arts pavilion and in the commercial court; its wares forming a significant component of the display put together by a local retailer, John Bates & Co. James Cowan, editor of the exhibition record, declared in awed tones that the Doulton display was ‘the finest of all […] some of these masterpieces of the designer’s and potter’s arts, were priced as high as £500 each ($78,424 in today’s terms).’ (J Cowan, Official record of the New Zealand International Exhibition of arts and industries, held at Christchurch, 1906-7 (Wellington: Government Printer, 1910), p. 299).

Doulton & Co appear to have produced two lines specifically for the exhibition: ‘Maori Ware’ and ‘Maori Art’. ‘Maori Ware’, later re-labelled ‘Kia-Ora Ware’, was produced in salt-glazed stoneware at the Lambeth factory, notwithstanding the Auckland Museum's erroneous identification of it it as being produced in Burslem. Its decoration – which resembles more closely the work of Joseph Mott - consists of a series of contrastingly coloured reliefs, loosely based on Māori carving. ‘Maori Art’, by contrast, reproduced kōwhaiwhai with a degree of accuracy and was produced initially in bone china at Burslem.
Doulton’s decision to deploy Māori-derived designs for its Christchurch display conformed to a wider cultural agenda. From the first of the great international exhibitions, the 1851 Great Exhibition of the Works of Industry of all Nations, British colonial authorities and, later, New Zealand settler governments employed Māori cultural artefacts not only to promote the colony as a destination for immigration and, later, tourism but also to emphasise the country's difference from other outposts of empire. From the 1879 Sydney International Exhibition until the 1924-25 British Empire Exhibition, the scale of these displays of the taonga of ‘subjugated’ Māori expanded to include wharenui. Inspired by displays of colonised people at the 1904 Louisiana Purchase Exhibition, a decision was made at the Christchurch exhibition to supplement a contrived display of indigenous material culture with Māori themselves. (B Kernot, ‘Māoriland metaphors and the model pā’, in Farewell colonialism: the New Zealand International Exhibition Christchurch, 1906-07, ed. by J M Thomson (Palmerston North: Dunmore, 1998), 61-78.) For Pākehā, Māori presence and symbolism at the exhibition served settler need for a unique identity and iterated a sense of hegemony over what was perceived of as a ‘dying race’. By appropriating the iconography of a culture that was not their own, the Doulton wares reinforced that Galtonian view.

The British Museum’s earthenware plate was apparently produced for the New Zealand and South Seas International Exhibition held at Dunedin in 1925-26. The preeminent focus of the exhibition was the British government pavilion, organised by the British Department of Overseas Trade and the Federation of British Industry, both organisations legacies of pre-war Board of Trade attempts to reform British industry. It included: a ‘Hall of Empire’; an ‘Historical Relics Gallery, which included costume and electrotype reproductions of historical silver from the Victoria and Albert Museum, archaeological relics from the Guildhall Museum and models of British cathedrals lent by the Dean and Chapter of Canterbury Cathedral; Naval, Army and Air Force galleries; and an ‘Industrial Art Gallery’ organised by yet another Board of Trade initiative, the British Institute of Industrial Art.
The over-riding sense conveyed by the exhibition generally was one of imperial recycling and Doulton & Co, rebranded in 1922 as ‘Royal Doulton’, entered into this zeitgeist by using the Dunedin exhibition to launch recycled Māori patterned wares: ‘Maori Art’, produced in earthenware at the failing Lambeth factory, was given a fashionable, buttery yellow ground. Contrary to the claims of the British Museum label, if any display in the New Zealand pavilion at the 1924-25 British Empire Exhibition at Wembley influenced the design of Doulton products it was probably the colour of  its ‘reasonably decent show of butter and cheese’, rather than its tokenist displays of decontextualised and misappropriated Māori art.

Posted by Christopher Thompson at 12:59 No comments: